Ashes to Ashes, Crust to Crust is the second book in Mindy Quigley’s delectable Deep Dish Mystery series, set in a Wisconsin pizzeria.

Newly single pizzeria owner Delilah O’Leary is struggling to keep her restaurant afloat in the resort town of Geneva Bay, Wisconsin. On the plus side, her strong-willed, “big-boned” cat Butterball is (mostly) sticking to his diet. On the minus side, while Delilah has been focused on pumping out perfect pizza pies, her ex-fiancé has cozied up to a new squeeze, juice bar owner Jordan Watts–Delilah’s rival in Geneva Bay’s annual “Taste of Wisconsin” culinary contest.

When one of Jordan’s juice bar customers is poisoned by a tainted smoothie, Delilah lands deep in the sauce. Accusations fly, suspects abound, and a menacing stranger turns up with a beef over some missing dough. Between kale-juicing hipsters and grudge-bearing celebrity chefs, Delilah must act quickly before another one bites the crust. 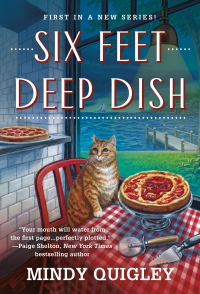 Delilah O’Leary can’t wait to open her new gourmet deep-dish pizzeria in Geneva Bay, Wisconsin—a charming resort town with a long history as a mobsters’ hideaway, millionaires’ playground, and vacation mecca. Engaged to a hunk with a hefty trust fund, Delilah is poised to begin a life that’s just about as delicious as one of her cheesy creations.

Just before opening night, though, Delilah’s plans for pizza perfection hit the skids when her fiancé dumps her and leaves her with a very large memento from their relationship—Butterball, their spoiled, plus-sized tabby cat.

Delilah’s trouble deepens when she discovers a dead body and finds her elderly aunt holding the murder weapon. Handsome local police detective Calvin Capone, great grandson of the legendary gangster, opens an investigation, threatening to sink Delilah’s pie-in-the-sky ambitions before they can even get off the ground. To save her aunt and get her pizza place generating some dough, Delilah must deliver the real killer. 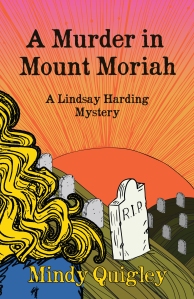 For hospital chaplain Lindsay Harding, facing death is part of the job. After all, she spends her working days comforting sick and dying patients. But when the annual Civil War reenactment in her hometown of Mount Moriah, North Carolina produces a real casualty, the Grim Reaper suddenly gets a little too close for comfort. With the clock ticking, the police struggle to unravel how and why a beloved local re-enactor was shot in front of hundreds of on-lookers.

Will courage, curiosity, and Lindsay’s irreverent brand of religion be enough to catch the killer before she becomes the next victim?

With the new year approaching, hospital chaplain Lindsay Harding heads for a much-needed break in the peaceful resort town of Duck on North Carolina’s Outer Banks. Her plan to attend the wedding of her friend Anna runs aground when a boatload of trouble washes ashore, and as the old year ticks down, the body count goes up.

Thrust into the path of an increasingly desperate killer, Lindsay must uncover a sinister secret before she winds up swimming with the fishes.

“We hid the body. The money belonged to everyone, but we stole it for ourselves. You have to help me give it back before it’s too late. If I don’t stop this, that money’s gonna drag us all straight down to hell.” 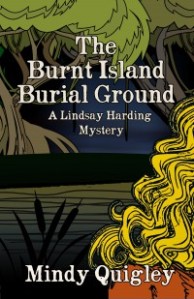 With these words, whispered to hospital chaplain Lindsay Harding as part of a cryptic confession, the stage is set for another intricately-plotted Mount Moriah mystery. All signs point to a murder, but no one can find any trace of a body. Lindsay’s sure that not all is as it seems, but she’ll need true grit and quick wit to follow a trail back through history to Burnt Island, a remote patch of North Carolina swampland.

Lindsay’s task is complicated by the shifting landscape of her personal life. After pre-wedding jitters jeopardize a relationship that seemed destined to be her best shot at happily-ever-after, Lindsay falls under the spell of a charming stranger. Whether she gets another chance at love will depend on following her heart…and on whether she can keep that heart beating long enough to unlock the mystery of Burnt Island.

Three times the Lindsay Harding laughs (A Murder in Mount Moriah, A Death in Duck, The Burnt Island Burial Ground) in one box set!

The Malice Domestic cozy anthology series returns with a new take on mysteries in the Agatha Christie tradition — 29 original tales with historical settings.

Mindy Quigley leads off Murder Most Historical with the tale of a young governess in nineteenth-century Johannesburg whose dream of finding a husband turns into a nightmare. Told through a series of letters, the story twists and turns through the decades.

In The Beat of Black Wings, Mindy Quigley and 27 other crime writers pay tribute to Joni Mitchell’s musical legacy with short stories inspired by her lyrics, representing each of her seventeen studio albums from 1968’s Song to a Seagull to 2007’s Shine.

Mindy Quigley has won a number of awards for her fiction, including the 2013 Bloody Scotland prize and the 2018 Lightbringer award. Her work as the coordinator of a pastoral services program at the Duke University Medical Center provided the inspiration for her bestselling Reverend Lindsay Harding mystery series. She recently began writing a new food-themed mystery series for St. Martin’s Press, which will debut in Fall 2022.

Before she started writing fiction, she worked in project management roles with university research centers, including the Anne Rowling Regenerative Neurology Clinic and the MRC Centre for Regenerative Medicine in Edinburgh, Scotland.

She lives in Virginia with her history professor husband, their two children, and their miniature Schnauzer.