A reviewer once opined that, though she loved my books, she found the speaking in tongues scene in A Murder in Mount Moriah unbelievable. I laughingly noted that that scene, along with the notorious squirrel in the bathroom incident, are just about the only events in the book that are based on true incidents. This reader had happily swallowed the miles of yarn I’d spun and choked on the single nugget of truth.

I was reminded of this recently during a long road trip with a colleague, who I travel with several times a year. You can only talk shop for so long, so we often end up telling stories of our younger days to pass the tedious hours trekking back and forth along I-81. We were regaling one another with tales of pets our families had kept over the years–the bird who angrily demanded everyone in the house go to bed at 9pm, the filthy stray female dog who, because of an anatomically ambiguous mat of fur, was thought to be a boy and thus ended up with the name Bert.

My colleague then said, “Did I ever tell you about Blanco?”

If you’re a keen historian of Presidential dogs, you may know Fala, FDR’s faithful Scottie, who is permanently enshrined on the National Mall. 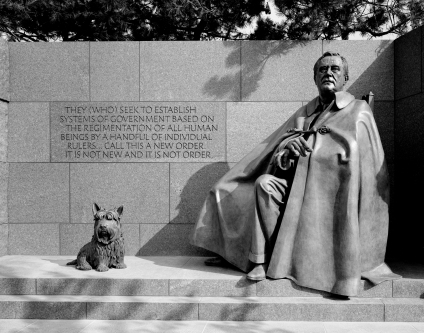 Also well known is Checkers, who Nixon famously refused to part with, even though accepting the dog as a gift may have violated campaign contribution laws. Less well remembered is LBJ’s collie, Blanco.

Lyndon Johnson was a beagle kind of guy, owning a pair of dogs named Him and Her and several of their puppies. Blanco joined the family in 1964, when he was given to President Johnson as a gift by a little girl in the Midwest. T

hough the Johnsons did their best to integrate him, Blanco was never happy at the White House. The constant noise and action involved in being a Presidential dog grated on the shy, high-strung collie. He didn’t get along with the Johnson’s band of beagles and didn’t like strangers. He ended up on tranquilizers to manage his anxiety. When the time came for the Johnsons to leave office, they started to talk about whether they should bring Blanco back to Texas with them or find a new home where he might be happier.

One of their Secret Service agents was part of these conversations and mentioned that he had a sister who lived on a 28-acre farm in Corbin, Kentucky with her doctor husband and their three children. The place would be perfect for a shy dog like Blanco. The arrangements were top secret, and Liz Carpenter, Johnson’s press secretary, declined to give the media any details. Citing the fact that several trees planted by Lady Bird Johnson had been dug up and filched, she said, “The dog is too likely to be stolen, so we decided not to say where he is.”

Despite these precautions, word spread quickly in tiny Corbin. Even before Blanco’s private charter plane alighted in the small airfield near Corbin, attempts at secrecy were undermined when Air Force One made a low, slow flight over the farm to check it out.

If the story so far isn’t wacky enough, here’s where reality becomes sur-reality. You see, besides being a favored retirement destination for Presidential dogs, Corbin, Kentucky has another claim to fame. It is the home of Colonel Harland Sanders, the man who founded Kentucky Fried Chicken. By the late 1960s, Sanders had moved away, but happened to be in town visiting. When he heard about Blanco from his chiropractor (who was friends with the doctor whose wife was the sister of the Secret Service agent who’d worked for LBJ), that LBJ’s dog was living nearby, he hightailed it out to the farm to visit with the vicariously-famous collie.

And that, my friends, is how Col. Sanders came to meet LBJ’s dog at my colleague’s childhood home. The story comes pre-packed with drama, humor, political intrigue, and small-town wholesomeness. It even has a happy ending, with Blanco living out his days in Corbin, happy, calm, and drug-free. Despite all that, I can never use this tale in a novel. Not even the most credulous reader would believe that reality could be so very much stranger than fiction.

View all posts by kevinformal